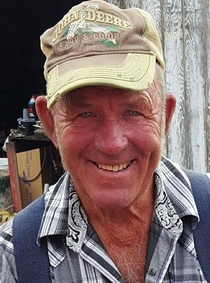 Alan L. “Al” Bohn was born on September 10, 1946 in Milbank South Dakota and left us on February 7, 2017 at home in Ronan, Montana. The melanoma cancer got him much faster than expected.

Al was the exact person that Paul Harvey talked about in his farmer dialog. He was tough and worked hard all of his life. He mostly measured one’s worth by their work ethic. He could do anything and fix anything, until those of us around him just shook our heads. He did not do it to code – he made his own rules, at all times. He always had time however, for some small animal that needed his help. He had his oh so soft side.

For the years up until 1981, he lived in South Dakota. He did many jobs, including tree planting, trucking, farming and house moving. He married and had four children – Alan, Robyn, Ginger and Jodi.  He divorced and moved to Montana – a place he fell in love with while trucking.

In 1982, he met Jane – and he became her husband, best friend and partner for the rest of his life. They married on his birthday, to make that doubly special.  Jane’s daughter, Cary, became his “baby girl” and he took over as her father too. In 1983, Bryan was born to Jane and Al. They lived in Valley Creek from their beginning until 2002, when they moved to Ronan. They raised Arabian horses, cattle, sheep, pigs – and any other critter of which they could dream. When they moved to Ronan, after Bryan’s graduation from college, Bryan and Al became a farming partnership – grain and hay. Al really enjoyed the father / son relationship, working together on the farming and ranching, and was so proud of Bryan and the job he is doing. He also had an irrigation pipe repair business. As always, he had more to do than he had time for, but that was how he wanted it.

He worked, as usual, up until just a few weeks before he left us. He could not stand to just sit around and do nothing.

He is survived by his wife Jane, his children, and many grandchildren and great-grandchildren. He had so many friends, as he loved to visit. His special smile is mentioned by everyone. He is missed by all – but we see him and feel his presence in everything we do.

At Al’s request, there will be no services.

To send flowers to the family in memory of Alan Bohn, please visit our flower store.