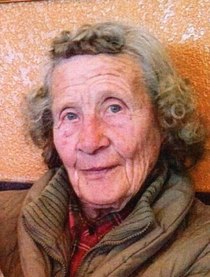 Alicia L. Whitman, 91, of St. Ignatius, left us on June 13, 2018 of natural causes. She was born on October 13, 1926 in Hot Springs, MT, a daughter of Fred H. and Lela C. Fitzpatrick. Alicia joined her siblings, Violet and Fred Jr, and later Tom, James, Robert, and Eva. Alicia grew up in Hot Springs and helped on the family farm.

Alicia met Lloyd Bailey and had one son, Bud Jesse Fitzpatrick, and then later Lloyd passed away. She then met and married Vern Whitman and moved to the family farm in St. Ignatius where they would raise sheep and cattle until Vern’s untimely death leaving Alicia a widow to carry on running the farm where her love of animals and gardening would keep her busy. Alicia brought in a friend, Bernard Hayes, to help with the ranching and the upkeep. Bernard and Lish, as she was called, always were helping people and giving rides to those that needed one. Due to unforeseen circumstances, the ranch came to an end and Bernard moved on.

Alicia was left with her own smaller piece of land with plenty of animals including cats, dogs, and the deer that ate her apples while Lish was just a cussing at them. She was one tough lady for her 91 years of life and will forever be missed. Rest in peace, sweet grandma Lishy.

Besides her parents and husband, Vern, Alicia is preceded in death by her brothers and sisters, one great grandchild, Tucker Layne Matt, and her loyal dog, Butter.

Burial will take place at the family cemetery at Oliver Gulch in Hot Springs, MT on Saturday, June 16, 2018, 1:00 PM. Messages of condolence may be sent to the family online at www.shriderthompson.com . Shrider-Thompson Funeral Home, Ronan, is assisting the family with Mrs. Whitman’s arrangements.

To send flowers to the family in memory of Alicia Whitman, please visit our flower store.