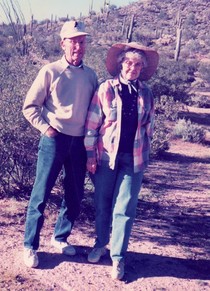 Anny Laura Skjoldal 99. Anny was born May 11, 1920 Bergan Norway. She flew away to be with the Lord on January 14, 2020.  At age 6 traveled by boat with her mom Marta, brother Henry and sister Esther to New York City where they met their dad Haakon.  They lived there for 2 years and traveled west ending up in Thunder Hawk, South Dakota.  The other siblings Malvin, Lillian, Milly, Shirley and Sherman were born in the United States.

Anny went to school in Lemmon South Dakota and graduated Valedictorian of her graduating class of 1938.  Anny went to Business College in Rapid City, South Dakota.  After graduation she worked at a bank in Lemmon.  She married Robert Anderson in 1946 and had 2 children, Carol and Tim.  She was a member of the music club and a Girl Scout leader.

Mom loved her family and with her faith in God gave her the strength to stand in the gap for her family.

He was born October 3, 1921 in  Lemmon South Dakota to Oakley and Anna Jacobson Anderson Passed over November 21, 2013.

They moved to Missoula Montana in 1953.  He worked in lumber mills and then worked sheet metal until he retired at age 61.

They lived 21 seasons in Why Arizona.  Was an avid fisherman, hunter and gardener.  Sold their property in Missoula and moved to Polson Montana.

Memorial graveside services for Robert and Anny with military honors will be held on Friday, June 26, 2020 at 11:00 A.M. at the Western Montana State Veterans Cemetery, 1911 Tower Road, Missoula, Montana 59804.

To send flowers to the family in memory of Ann Anderson, please visit our flower store.