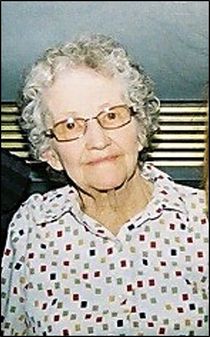 Clara Elizabeth (Bick) Miller Our Mom often reminded us that life isn't fair. But sometimes it isn't fair in your favor. We were the most blessed of children to have Clara as our mother because this was what she wanted most. To be a mother.

Clara Elizabeth Bick was born September 4, 1924 to Clarence and Evelyn (Pierce) Bick in Broadview, Montana. She had seven brothers, but only one sister. Sadly, her little sister Wilma died of whooping cough when she was just 10 weeks old.

Her family moved to Creston when she was a child, eventually settling in the Round Butte area near Ronan. Clara graduated from Ronan High School in 1942. In 2012 she attended her 70th class reunion.

Clara married her high school sweetheart, Ray "Pat" Miller on January 5, 1944. Shortly after, he enlisted in the Army Air Corps and was sent overseas to fight in World War II. While he was away, their first son, Ray Jr. was born. It was nearly two years before the little family was reunited. In time, eight more children were born to Clara and Pat.

They moved around the first few years of marriage, following where Pat could find work until they were able to come back to the Mission Valley and build their life and home on the ranch land she loved so much. She was always busy, believing,"You should get up and do something even if it's wrong!" Clara was an active farm wife and raised many different kinds of animals, including cattle, horses, Shetland ponies, pigs, lambs, chickens, ducks and more. She hosted many school field trips at the ranch, and baked thousands of sugar cookies for the kids.

Clara was an active member of the Sew-n-So Club. With her friends, she completed many hand-pieced quilts, that were raffled off to raise money for various local charities. She was also a charter member of the Pablo Nazarene Church, where she taught Sunday School and helped with Kid's Club for many years. She was involved with 4-H with her children in the Round Butte area.

Clara always planted a big garden and canned everything she could for her family. In later years she only planted the flowers she loved so much. There were many drives through the country, to pick wild flowers for pressing. She loved to sew dresses for her daughters, covers for Pat's covered wagons, hand-pieced quilts for her children and grandchildren, Raggedy Ann dolls and to embroider dishcloths.

April 28, 2018, surrounded by her family, Clara passed from this life. She is reunited in Heaven with her parents and mother-in-law, her little sister Wilma, who she missed her whole life long, her brothers Charles, Ralph, Art, Herb, and Robert (who died as an infant), the love of her life, Pat, her husband for 58 years, and her daughter-in-law, Candace.

Missing her dearly are her brothers Raymond and Bill, her nine children and their spouses, Ray (Nancy), Brad (Cheri), Susan (Lee), Jann (Rory), Jane (Aaron), Mary-Anne (Jay), Alyce (Tom), Daniel (Amy), and most importanly her loving son Gale. His devotion, attention and companionship were his greatest gift of love. Because of him, she was able to live in the home Pat built for her until her very last day. She will also be missed by her eighteen grandchildren and nineteen great grandchildren, of whom she was very proud.

A celebration of Clara's life will be held at the Pablo Nazarene Church on Wednesday, May 2 at 2:00 in the afternoon. There will be a gathering afterwards at the Ronan Senior Citizen's Center.

To send flowers to the family in memory of Clara Miller, please visit our flower store.