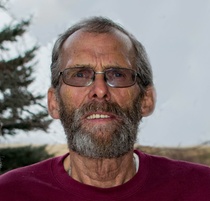 It’s hard to know whether his life’s titles or his many loving names describe Don Emerson better.  A flip of a coin landed miraculously on the edge, so we’ll combine the two to tell this beautiful story:

Don attended school in Ronan, Montana and graduated from Ronan High School in 1968.

While working as a farmhand for Gene & Bobbie Guenzler, he was swept off his feet (or was it the other way around?) by meeting June Guenzler’s best friend, Leah Miller.  They said “I Do” on September 9, 1972 and that love story has lasted more than 45 years and continues still.  Leah remains mum about the various names she might have called Don over the years...use your imagination.

It has to be said…Leah came with baggage…in the form of Harry and Rosemary (Doyle) Miller – who added Don permanently to the list of their sons, as well as four new brothers (Mike, David, Jim and Steve) and four new sisters (Jeanne, Kathy, Sheila and Frances).  Imagine inheriting new parents and EIGHT new siblings in one fell swoop!  Of course Don managed it with his usual calm, quiet grin, and ability to join in with whatever fun or mischief that was afoot.

Some guys are just made to be fathers.  From the phone call right before Christmas 1978 announcing the imminent arrival of son, Matthew, to the births of his brothers Nick and Chris, Don seamlessly went from being big brother to so many to the absolute delight  of becoming Dad to these three.  He also threw himself and that gift of love, energy and joy into being the American Dad to German exchange daughter, Christina Mueller for over a decade now.    As often happens in these life stories, Nick and Chris brought beautiful brides into the family, and Casey (Fischer) and Sarah (Nance) got a second “Dad” to love and rely on.

Don’s nieces and nephews, as well as all of the “greats” comprise a cast of thousands…well, at least dozens!  And to a person, Don was the guy who was always there, a constant in life, doing things for everyone with such incredible love and care.  Don's long-standing willingness to share his snacks with children small and large earned him the loving moniker, “Cookie Boy.”

If being a brother, father and uncle was natural for Don, becoming a “Papa” had to be written in the stars.  The unbounded love, generosity of time, dedication of life and spirit, intensity of pride, and gales of laughter have increased with the addition of each beloved grandchild:  Hunter, Holden, Carson, Madison, and Hadley.  Papa Don was always thrilled to share his love of camping, hunting and sports with his favorite people in the world, and their lives will be forever the better for it.

Starting during the years sons Nick and Chris played baseball, Don’s many years of full participation and involvement with the Mission Valley Mariner’s team introduced dozens of young men to the calm mentoring, support and fatherly presence of the man they lovingly named “Papa Em”.

Our beautiful Don was justifiably proud of his 30+ years of sobriety, setting a living example of strength and commitment for his sons, siblings, niece/nephews, and grandchildren.  Don walked the walk in the most personal way.

Over his 6+ decades, Don earned the titles of Construction/Carpenter, became a student (again!) at the age of 40 to attain his Associate’s in Chemical Dependency Counseling from SKC, used that degree to the community's advantage both as a Lake County Deputy Sheriff, Ronan Volunteer Ambulance, and with adults with developmental disabilities at Mission Mountain Enterprises.  These experiences and the people he met led him to a true avocation he would pursue for 25 years, working with Special Education Students and driving Ronan Chief school students both daily on his regular bus route, and many thousands of miles safely to sporting events and home again.  Ronan’s cross-country, track and girls basketball teams wouldn’t know what to do if Don wasn’t in the stands cheering them on.

So how does this story end?  Well…it doesn’t.  The loves, the lives, the community that Don Emerson was so intimately a part of will see to that.  As a matter of fact, every time you see a tall, thin man wearing a U of M Grizzlies sweatshirt, you’ll remember... and smile.

A celebration Mass for this amazing man will be held on Saturday, March 3, 2018 at 10:00 am at Immaculate Conception Catholic Church in Polson in order to accommodate everyone who knew and loved Don.

If you want to remember Don, please do it in the way he would have:   send a donation to any organization that supports persons with disabilities, support your local sports teams, or give to a group that is devoted to bettering the life of children.  Pay it forward…Don always did.

To send flowers to the family in memory of Donald Emerson, please visit our flower store.