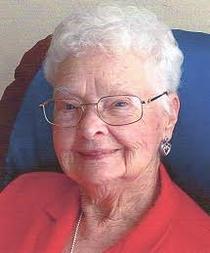 Jean Maxwell passed away at her home in Missoula on July 11, 2017 after a short illness. Her daughters Wanda Wise, Judy Maxwell, and Joan Harbin were with her at her passing.

Jean was born in Lindon, Colorado on February 6, 1927 to Howard and Bertha Wolfe. She spent her early years on Colorado and then the family moved to Montana and settled in the Ronan area.

She met Phillip Maxwell, who would become her lifetime companion. They were married on March 7, 1948 and were together for 67 years. Wanda was born in 1950 and the twins, Judy and Joan, were born in 1951.

Jean and Phil raised Hereford cattle in Round Butte in Ronan. Later Phil entered the real estate business. They liked to travel and visited Mexico each winter for many years. Jean enjoyed camping, snowmobiling, and preparing meals for her family, especially on holidays.

Phil preceded her in death in November of 2015 at their winter home in Yuma, Arizona. Afterward, Jean moved moved to Missoula.

Jean is survived by her three daughters, four grandchildren, Wyatt, Jordanne, Elliott, and Scott, and several great-grandchildren. At Jean’s request there will be no memorial service. She will rest in peace beside Phil in Mountain View Cemetery in Ronan.

To send flowers to the family in memory of Eldora Maxwell, please visit our flower store.