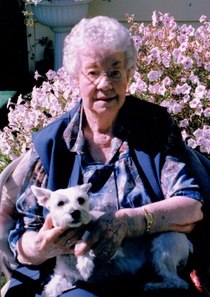 Elsie Phillips Garbe, 99, passed away on June 27, 2018, at the St. Luke Extended Care Center in Ronan. Elsie was born on January 6, 1919 in Great Falls, MT to Leon and Crete D. Phillips. She grew up and graduated from high school in Highwood, MT and in 1937, the family moved to Ronan and Elsie worked for her father at the Phillips Variety Store.

In 1940, she married John Hughes and moved to a farm west of Ronan. To this union, a daughter, Bonita Kay Hughes, was added.  During WWII while her husband, Johh, was overseas, Elsie worked for the Associated Seed Co. in Ronan and Peschel’s Café.

Later in 1951, the married George Garbe and moved to Pablo where she has resided ever since. In 1953, Elsie became a clerk at the Ronan post office and then transferred to the Pablo post office when an opening came up. Then in 1963, she was appointed Postmaster by President John F. Kennedy just two weeks before his assassination. Elsie served the US Postal Service for 30 years, retiring in 1983.

Elsie enjoyed her home, music, crocheting, flowers and rose gardens, and reading. She was a longtime member of the Christian Church, where in her early years she taught Sunday school, Bible School, and played piano for the church.

She was preceded in death by her parents, a brother, a sister, and a niece.

She is survived by her daughter, Bonita Kay Armine of Pablo, MT; nieces, Claudia Phenneger of Spokane, WA; a cousin, John Didier, of Alberta, Canada; and her precious dog, Angie and grand-dog Cassie.

Memorials in her memory may be made to the Montana Sheriff and Peace Officers Association, First Baptist Church of Polson, or to the St. Luke Extended Care Center in Ronan.

To send flowers to the family in memory of Elsie Garbe, please visit our flower store.