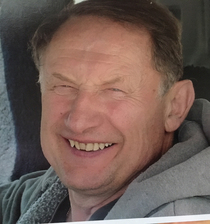 Erwin Hertz, a logger-turned-electrician who confronted hardship with optimism and faith, died Sunday in the same Charlo, Mont. farmhouse where he was born.

He suffered from heart failure and had moved from Haines in August. The date of an upcoming service at Sacred Heart Catholic Church is pending.

Friend Dick Flegel said he will be missed, “You couldn’t see Hertz without seeing a smile. He was a lot of fun.”

Hertz was known around town as the King of the Fourth of July, having launched, organized or participated in many of the holiday’s events. He started the Mad Raft Race in 1961 and competed in it until 2011, even after it lost official sponsors due to perceived safety and liability issues. “Sure it’s dangerous, but if it wasn’t a little dangerous, it wouldn’t be fun,” he told a newspaper reporter.

Hertz also is believed to have started the Mount Ripinsky Run in the early 1960s on a trail he pioneered. For years, he organized Independence Day nail-pounding contests, bed races, and the logging events that became the Southeast Alaska State Fair logging show. Alan Henrich, who kept the show’s books, said Hertz was in his late sixties when he decided to enter every contest in the competition, a formidable challenge even for a young logger. “He did very well, but he scared us to death.”

In a 2013 Chilkat Valley News interview Hertz said, “I don’t want to be sitting in a doctor’s office in my old age. I won’t do that. It’s a great life, but you have to do things. I’m going to die with my boots on.”

Hertz said he was raised a Catholic but his devotion began in earnest after being crushed by a falling tree while logging near Mosquito Lake in mid-December, 1964. “I wore the Bible out,” he said.  He was inspired after his soul left his body and he looked down from above as other loggers gathered around him and he heard one say, “‘He’s dead. I’m going back to work.’”
“Where I was was very peaceful. I had complete peace with everything. It was amazing. I didn’t want to come back,” Hertz said.

For 10 years after that accident Hertz lived with a fused spine and a drug regimen he said made him sick. When the fusion failed, he quit the drugs and began hanging upside down and swimming in Lynn Canal to ease the pain. He built up his abdominal muscles, ran, lifted weights, drank juices and herbal teas, and hiked up Mount Ripinsky to keep fit.

Hertz mentored his four athletic children, some who still hold school records.  “We remember dad walking around on his hands in the living room. He would tell us to walk to school because ‘getting in a car is bad for your knees,’” said daughter Mary Ake.

Hertz and his family regularly rode bikes out to the former steakhouse at 10 Mile for dinner and back. They practiced logging contests like ax-throwing and log-bucking together.

Hertz became an electrician for the former Alaska Forest Products sawmill, and went on to do commercial and residential work until two years ago.

Dick Flegel credited him with donating all the electrical work and materials for the Sacred Heart Catholic Church. Hertz served as a volunteer fireman, and became known for a prodigious appetite. “He could eat 24 deviled eggs and then have prime rib. I don’t know where he put it,” Flegel said.

In 2013 Hertz self-published a spiritual memoir, “Journey to Eternal Life – Alaska Style!” “Hertz was a man that was not afraid of sharing his faith, and that’s rare. He didn’t do it an obnoxious way, it was part of his life,” friend Terry Sharnbroich said.

Erwin Nick Hertz Sr. was born Aug. 3, 1936 on farm outside of Charlo, Mont. He was the fourth of eight children born to Augustin and Albertine Doll Hertz. Hertz called himself a “farm kid” and his memoir contains stories of riding horses and shooting guns at a young age. “We jumped off barns onto horses’ backs, leaped off cliffs into the river…sometimes on horseback. We had lots of freedom with guns.”

Lisa Novak credits rural life with her father’s talent for “fixing cats and dogs.” Hertz was the closest thing Haines had to a vet for years, and neutered local pets. He also worked on sore backs, she said, earning him the nickname, “the castrating chiropractor.”

After graduating from Charlo High School, he served in the Navy from 1956-60 and was trained as an electrician. In 1961 he and two friends drove to Haines. He worked for the railroad in Skagway and for Schaefer Logging, until the accident.

Hertz met Georgia Ann Allen at the movie theater in Haines in 1963. They married on Feb. 8, 1964 at the Holy Family Catholic Church in Deming, N. M.

“Dad had a good full life and we know he is in a very happy place right now. As he would say many times throughout the day, ‘Alleluia!’” Mary Ake said.

Son Jesse and siblings Richard, Eugene, and Loretta Morrell preceded him in death. He is survived by siblings Duane, Leroy, Linda, and Douglas, and children Erwin Nick “Stony” Hertz Jr. of Haines, Lisa Novak of Albany, Ore., and Mary Ake of Bend, Ore.

To send flowers to the family in memory of Erwin Hertz Sr., please visit our flower store.