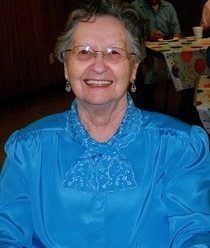 Jane JoAnn Kraft passed away from Alzheimer’s on May 1, 2018 with family by her side at St. Luke Extended Care Facility in Ronan. She finally gets to go to heaven and hand out mail to the angels!

JoAnn was born June 27, 1931 to George and Ruth Furhan in Tracy, MN. She had one older brother, Maynerd, and an older sister, Phyllis. Mom was always a “city girl” until marrying that country boy, Ernest William Kraft, on November 27, 1949. They lived on a small farm just outside of Oakes, ND until they moved to Moeise, MT in March of 1954.

JoAnn was a full time housewife, kid entertainer, and a hostess to the many visitors Ernie would bring home unexpectedly from the Bison Range. The family had a lot of visitors from all over the world and Mom became a surrogate mother to many while they worked at the Bison Range. JoAnn went to work at the Charlo Post Office when they moved out of the Moeise Valley to Charlo. She worked at the post office for 25 years and got to know most of the people in the Mission Valley. Mom often delivered packages from the post office on her way home, especially on Christmas Eve. New babies were weighed on her postal scales and given socks if they had arrived with bare feet.

When Ernie and JoAnn retired, they became snowbirds and went to Arizona during the winter months for 13 years. The city girl and the country boy moved from the Moiese/Charlo Valleys to an assisted living facility in Polson for several years before JoAnn moved to St. Luke Extended Care Facility in Ronan.

Mom and Dad had 64 years together – and what a ride it was!

JoAnn is preceded in death by her parents, husband, Ernie, a son, Michael, her brother and sister, and many brothers and sisters-in-law.

She is survived by her sons, Chris (Barbara Hall) of Dillon, Mark (Carol) of Missoula); daughters, Brenda (Darrell) of Ronan, and Deb of Missoula; numerous nieces and nephews, 2 grandsons, 3 granddaughters and 10 great-grandchildren.

The Kraft kids would like to thank the St. Luke’s Extended Care staff, Dr. Cullis, and nurse Kim for the wonderful care and love she received while in their care. We appreciate it more than you will ever know.

Services for JoAnn will be held on Saturday, August 11, 2018 at 2:00 PM at Mission Valley United Methodist Church on top of Post Creek Hill.

To send flowers to the family in memory of Jane Kraft, please visit our flower store.