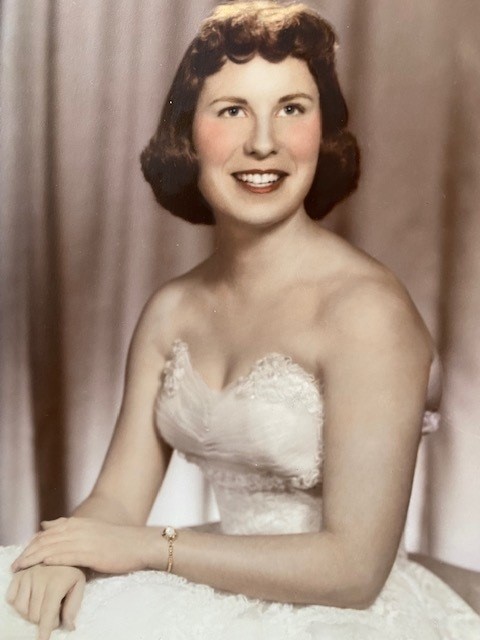 Joan Gail Hove Thompson was born November 8, 1937, in Enumclaw, Washington, to John and Irma Hove.  She was called back to heaven July 18, 2022, surrounded by her family in Ronan, Montana.

Most of Joan’s early life was spent in and near Ray, North Dakota. As a teenager she was introduced to the Flathead when she spent two summers at Rocky Point Lodge.  She moved to Polson before her senior year in high school and graduated from Polson High School.

While working at the Lake County Sheriff’s Office, she met a handsome patrolman, George Goggins.  They married in 1956 and had two beautiful children, Lisa and Jay.

Joan worked at the Ronan Telephone Company and at Harbin Insurance.  While working at the telephone company she met her second husband, Virgil Wayne Thompson.  They married in 1974 and filled every day with joy.  They were always in each other’s company enjoying hobbies such as, square dancing, bowling, camping, music, and card games.

Those who knew Joan appreciated her intelligence and her wit.  She was a great cook and would always put on holiday dinners.  She always made sure everybody had enough to eat and would always bake her famous cinnamon rolls and orange bread at the holidays to make sure everybody in her circle felt cared about.  Joan loved all animals, but had a soft spot for dogs, ranging from teacup chihuahuas, to poodles, to mastiffs.  Joan was always doing something.  She read the newspaper every morning and completed every crossword and word search.  Joan would never sit without a good book in her hands.  We all have our favorite “Joan stories” and images of her.  Although Joan’s opinion was strong, she was always the rock of the family.

Joan was preceded in death by her parents, her husbands, her beloved son Jay Goggins, her sisters Judy Harding and Sandy Hove, and her brother John Hove.

She is survived by her daughter Lisa Goggins, her granddaughter Jenna Nickol and husband Owen, her great-grandchildren Sabra and Cyrus Nickol, her sister Susan Hove, her brothers-in-law Jim Pabst and Jay Harding, her stepdaughter Jackie Smart and her husband Alan, and several loved nieces and nephews.

No services are planned.

To send flowers to the family in memory of Joan Thompson, please visit our flower store.