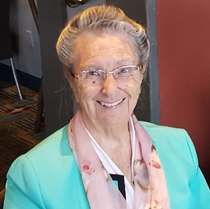 Leola Carol Stipe Taylor 85 passed away peacefully on July 5, 2018 at the Tri-Cities Retirement Inn in Pasco, Washington. Leola was born to Paul B. Stipe and Bonnie F. Coleman Stipe on July 22, 1932 in Saint Ignatius, Montana.

She grew up in Moiese Valley on the Stipe Family farm, with her seven sisters & one brother.

In 1943 at the age of eleven God was doing a work in her young heart so she let this be known in a Sunday morning fellowship meeting in the family home while Arthur Pickess was present. She held an undying faith and trusted in God throughout her entire life.

She moved to Spokane, Washington living and working with her sisters Alma & Alice in 1950.

Leola & Wally lived in Spokane Valley in the areas of Dishman, Millwood, then Otis Orchards where they raised their five children on a former twelve-acre apple orchard.

Leola loved her home and being a homemaker, lovingly caring for her children.  She worked hard keeping up the home and yard. She had a beautiful rose garden that she lovingly cared for and a large garden that she enjoyed working in and used to feed the family. Yearly canning and baking were a large part of her young family life. She also provided a lot of support to her children, even allowing them to have many various pets. She supported her husband in his efforts, as he built their business, which often required him to be away from home.

Her piano was a real friend as she loved the joy it brought her as she played the hymns and music. She also enjoyed playing harmonica and the accordion. After a trip with her family to Hawaii, she fell in love with Hawaiian music. She had a beautiful voice and used it to lead the meeting hymns for years.  The color pink was always, by far, her favorite.

She loved a clean home and often opened the windows to let some fresh air in.  She taught her children how to love, work hard, play often and live a clean, organized life. Most of all, she truly shared unconditional love with her children and family.

For a short period of time she worked in a gift shop in Spokane and definitely enjoyed it. She did home health care work for about twenty years in Portland & Seattle. She then returned to live in Spokane in 2005 until her recent move to Pasco, Washington in 2017.

To send flowers to the family in memory of Leola Taylor, please visit our flower store.