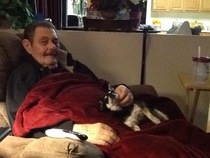 Lewis Alexander McLeod was born, July 28, 1945, in Grand Prairie, Texas to Alex and Viola McLeod. He was an enrolled Confederated Salish and Kootenai tribal member and elder.

His bravery during the Vietnam War, and throughout his career, earned him many awards and decorations. As a Marine, he served four tours in Vietnam. Lewis continued after Vietnam, serving in the Air Force. He retired with honors from the US Air Force as a Senior Non-Commissioned Officer.

Upon retiring from the Air Force, he relocated back to Pablo, Montana, where he began working for the CSKT Environmental Program as an air quality technician. Later, Lewis integrated with the tribal WRAP program and traveled the country as an advocate for tribal environmental issues. Lewis never met a stranger and was known for helping anyone he came in contact with . When his mother became ill, he took care of her. He was very close to his family.

Lewis passed away on August 17, 2017, in hospice care at the Bellevue, Nebraska home of his son, Shawn and daughter-in-law, Jessica. He was comfortable, safe and loved until he departed to walk with God.

Preceding Mr. McLeod in death are his parents, Alex and Viola McLeod, his sister Patricia Kolasinski, and his son Michael McLeod.

He is survived by his daughter, Meshell McLeod-Mahoney of Ft. Collins, CO, son Jason McLeod of Oregon, son Shawn McLeod and his wife Jessica McLeod of Bellevue, NE, seven grandchildren, two sisters, Rita Maloney of Polson, MT and Wanda Bennett of Polson, MT, and aunts, uncles, cousins, nieces and nephews and many, many friends.

The Wake service will begin on Tuesday evening at 9:00 P.M. until 12:00 P.M. when the wake will close to be followed by a Memorial Mass. Graveside services will be at 2:00 p.m. at the Ronan Cemetery with full military honors.

To send flowers to the family in memory of Lewis McLeod, please visit our flower store.