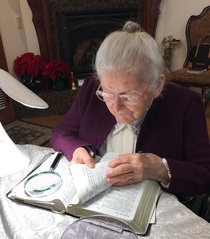 On July 7, 1918, 4 months before the end of World War I, a baby girl was born to Anton and Bessie Gamma on a ranch west of Kalispell at Ashley Lake. They named her Mary. Mary Bessie Gamma was raised on that ranch along with her older brother, Joe, and younger brothers, Frank and Henry. Mary, along with her brothers and the Ben Brist kids from the neighboring ranch, walked more than two miles to a one room school in all weather conditions to receive a formal education through the eighth grade. Sometimes in the winter they would get a ride with the sled and team if the snow was too deep.

In 1934, at the age of 16 when two ministers came to that area with the gospel message, she made her choice to serve God. That choice was the framework for her life for the next 84 years. In her 100 years she saw many changes in life, but the one thing that was unchanging and an anchor to her soul was her faith in God. Mary and her husband, Reuben, cherished the Sunday morning worship meeting in their home and the yearly church convention at their property.

Mom was a beautiful woman who was equally at home playing the piano, driving a team, shooting a rabbit for dinner, or a deer or bear in the fall for the same purpose, or cooking a gourmet meal  with very little while extending hospitality to everyone. If you saw the Northern Lights at two in the morning, she would want a call so she could get up and see them also. She always stayed up to see the New Year in. She enjoyed visiting, her garden, getting a good deal, vinegar, and watching the price of bananas.

Mom was always a caregiver and was interested in everyone’s journey. She ran the farm at Ronan when dad was working construction, cared for her ailing mother, then her father in law, and later her husband, Reuben, who suffered from Parkinson’s disease.

Grandchildren and great-grandchildren were her delight. She was never too busy to have a tea party or to listen to a recap of a game (although she knew little about the sport) or sharing and experience.

Through the loving care of family, she was able to finish her days at home.

Funeral services will be held on Saturday, August 18, 10:00 AM at the Ronan Community Center with a potluck lunch following burial at the Ronan Cemetery.

To send flowers to the family in memory of Mary Hoversland, please visit our flower store.