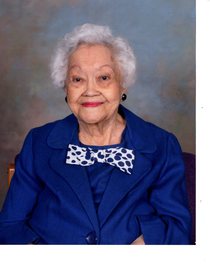 Olivine Marie Burland passed away on Saturday, July 15, 2017 at St. Luke’s Community Health Care in Ronan at the age of 100. She was the oldest tribal member of the Confederated Salish and Kootenai Tribes.

She was married to Frank Burland who preceded her in death. They had 10 children; two of them have also passed away, Frenchy Burland and Leroy Burland. The remaining eight are Barbara Mann, Florence Gehring, Eugene (Dick) Burland, Betty Hernandez, Janice Durant, Sheri Whiting, Marilyn Howell and Tracy Burland; she also has many grandchildren, great-grandchildren and great-great-grandchildren.

She will be greatly missed.

Memorial services for Olivine will be held on Wednesday, July 26, 2017 at 4:00 P.M. at the Kingdom Hall of Jehovah’s Witnesses, on Hwy 93 South in Polson.

To send flowers to the family in memory of Olivine Burland, please visit our flower store.