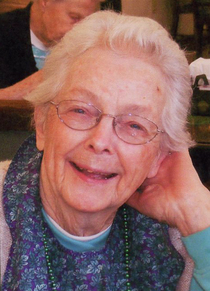 Rita Jean Senkler, 91, passed away following a brief illness on Tuesday, January 17 2017.  She was born on a very hot night, at nearly midnight on July 3, 1925 in Sandpoint, Idaho and Rita was fond of saying the whole country celebrated her birth on the Fourth.  Rita was the fifth child born to Edward Aloysius and LaMina Eva “Minnie” (Marquis) Martin.  Her parents’ marriage disintegrated and Rita was sent to live with her aunt and uncle in Plains, MT at the age of 4.  At age 5, she started school at the Holy Names Academy in Spokane.  During the Depression years, Rita, her mother and two sisters lived in different cities including Madison, Wisconsin and Los Angeles before returning to Spokane where they were finally able to live together in a one-bedroom apartment on West Riverside until the girls each married.
Rita worked at Hart and Dilatush Pharmacy and at the Spokane and Eastern Bank following high school graduation.  Rita was a parishioner at the Cathedral of Our Lady of Lourdes and met Howard Senkler during a Sodality meeting.  They were married May 28, 1949 and moved to Hartline, Washington where Rita said she completed her education “out behind the barn.”  As a city girl with no cooking experience, she soon learned how to serve up meals to three hungry adult men and then a harvest crew on the dryland wheat farm the Senkler family owned ten miles south of town.  Rita and Howard had three children, James Edward, Kathleen Ann and Mary Beth (deceased 1978).  In 1965, the family moved to Charlo, Montana where Howard raised registered Black Angus cattle until he retired in 1977.
Mary Beth gifted her mother with a plaque in the 1970s that read, “Bloom Where You Are Planted.”  That was an apt description of Rita’s attitude during her lifetime.  With a strong faith in God and deeply-rooted Catholic beliefs, Rita faced many difficulties and challenges with strength and optimism.  One of her favorite Biblical sayings was, “Be not afraid,” which gave her the courage to stand firm in her convictions.  One of her strongest passions was to further the cause of the unborn, to share the belief that all life is sacred from the moment of inception to its natural end.  She continued at this work until her natural death.
Over the years, Rita participated in the Mission Valley Garden Club, volunteered at St. Luke’s Extended Care and was involved in numerous community activities.  She enjoyed her square-dancing days wintering in Arizona, learned to write cinquain poetry at The Red Poppy in Ronan and joined Toastmasters in her 80s.  She loved a good game of cribbage and gin.  In fact, a few days before her death, she beat Jim at a game of cribbage.  A lover of words, she worked crossword puzzles and cryptoquotes and was so proud she had finished a crossword puzzle just the day before she died.  Rita loved to read and watch the news, and enjoyed a lively discussion of political issues as well as writing Letters to the Editor.
Rita had a healthy sense of self-deprecating humor.  She laughed daily at her foibles and often took to pen and paper to create a poem about them.  In her later years, she regretted that she did not have a degree so she could have letters behind her name.  So she came up with DeOW, which stands for “Decrepit Old Woman.”  She actually filled out her medical forms with this and also listed “SIW” as one of her ailments (self-inflicted wounds).  She enjoyed seeing the medical staff react to her humor.
Rita is survived by her children Jim, and his wife Linda Bowman, and Kathy, plus nieces and nephews.  Her daughter, Mary Beth, her sisters Dorothy and Lois, and husband, Howard, preceded her in death.
In lieu of flowers, please remember Rita with a memorial gift to The Nest in St. Ignatius or to the Ninepipes Museum of Early Montana in Charlo.  Rita asked that a party be given following her funeral mass, so please join the family at Ninepipes Lodge for a reception in her memory.
The funeral mass is at 11 a.m. Tuesday, January 24, 2017 at the Mission of St. Joseph’s Catholic Church in Charlo with the internment of ashes at Holy Cross Cemetery in Spokane being held in the spring.

To send flowers to the family in memory of Rita Senkler, please visit our flower store.